Guidelines for Terminating the Employment of an Employee 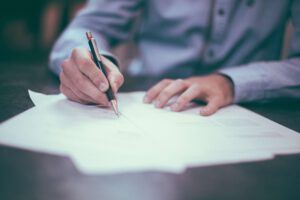 e.g. testimonies of witnesses (such as the employees or clients who personally witnessed the taking of property or the sexual harassment) or documentary evidence (such as the document containing a falsified entry, the logbook or record book which will show that an employee was absent during a certain day).

Re: Notice of Hearing for Violation of Established Company Rules and Regulations.

May we inform you that you are presently under investigation for the commission of an offense, which constitutes a violation of the established company rules and regulations.

(here state the particular acts or omissions) e.g. As shown by the daily time records, you have been absent for 20 consecutive days without the permission of the company. You have been required to come to work however you willfully disobeyed said orders, as a result thereof the company suffered substantial financial loss due to your habitual and gross neglect of duties. In addition, it was discovered after several inspections conducted by the supervisors that several company properties under your custody and control are missing.

Consequently, the following charges are imputed to you:

In connection with this, you are hereby summoned to attend the conference on ____ at ___ o’ clock at __________, presided by the following: (a) HR Head/Manager; (b) the head of the department to which the employee is stationed; and (c) corporate counsel. You are likewise required to explain in writing why you should not be held liable for administrative sanctions within forty eight (48) hours from receipt of this notice

Your failure to attend the said conference and submit a written explanation will constitute as a waiver of your right to present evidence, judgment will then be rendered by the company on the basis of the available evidence. If so desired, you may appear with the assistance of a counsel.

Thank you very much.

* If the continued presence of the employee poses a serious threat to the person and/or property of the employer, the employee may be placed under preventive suspension pending investigation of the incident for a maximum period of thirty (30) days effective upon receipt of the notice. Such suspension, if applicable, must be included in the notice.

Under Art 282 of the Labor Code an employer may terminate an employment for any of the following just causes:

* If the evidence presented during the hearing would reveal that the offense committed was not of serious nature, a lesser sanction of suspension may be imposed against the employee.

Re: Notice of Decision for Violation of Established Company Rules and Regulations.

May we inform you that after due consideration of all the circumstances and the evidence presented during the conference wherein it was established that you have been absent for 20 consecutive days without the permission of the company, and that you have been required to come to work but you willfully disobeyed said orders, that, as a result thereof the company suffered substantial financial loss due to your habitual and gross neglect of duties. In addition, you have not satisfactorily explained the reasons why several company properties under your custody and control are missing.

Therefore, it is clear that there are proper grounds which would warrant the termination of your employment.

Consequently, effective ______, you are hereby dismissed and terminated from employment.

(In any event, it is still advisable to engage a lawyer and/or an experienced HR practitioner most specially on complex cases involving erring employees.)